When it comes to Super Bowl ads anymore, it helps to go in with low expectations. Even then, you can be disappointed. We sure were.

Apparently when you pour all your money into the ad time – plus the outrageous costs of hiring several celebrities for two or three seconds of screen time – there isn’t much left over for real creativity. That certainly was the case with most of the ads we endured. 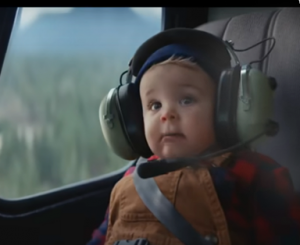 A good ad tells a story, and a great ad tells a powerful story in a short time. The Budweiser Clydesdales, at least in the past, were a prime example. They touched your heart. This year’s Clydesdale entry was a half-hearted collection of image snippets that may very well have been cut and pasted from a previous year. It seemed like someone started working on it the Friday before the game and just didn’t have much time or interest.

One of the few narratives was the robot dog, but how do you make an emotional connection with that? Everyone in our household gave it a thumbs down, counting our two dogs. And its connection with an electric vehicle was iffy at best. Apparently Salesforce tried a narrative with the Matthew McConaughey balloon ad, but it didn’t work for us. Maybe there was some movie we didn’t see that it was playing off, but it left us dazed and confused.

The Coinbase ad, with the monotonous screen saver QR code, had to be one of the worst things we’ve ever seen. It seemed to take forever, and at the price per second for an ad, that was a poor investment for a “financial” company. Yes, we heard that the response was such that it “broke” their site. But did anyone have the foggiest idea what they were going to when they captured that code?

Enough with the negativity. We did enjoy the E*Trade baby coming out of retirement. A good combination of harking back to strong ad imagery from the past plus fun use of the retired-action-hero movie trope. It had a bit of that narrative we look for. We’d have to say it was our favorite.

The Rocket Mortgage Barbie house showed creativity and a fun bit of satire while at the same time staying connected to the advertiser’s real line of business.

We also enjoyed Eugene Levy’s Nissan driving experience, although they could have eased up on the computer graphics and half-second images a bit. Maybe their target audience has the attention span of a gnat? And for what it’s worth, at the time we wrote down “Toyota” in our notes rather than “Nissan.” Tells you something.

And we liked the Austin Powers “reunion” ad for its entertainment value, but it never really connected with General Motors. If we hadn’t made a note at the time who paid for the ad, we’d never have guessed it.

A few other ads had some bright spots, and at least we were spared from all the preachiness that bogged down the ads of 2021. The advertisers tried to have a good time, but at some point it does have to get down to selling the product. In the long run it’s really not worth millions of dollars for 30 seconds plus creative costs if the payoff is just a bit of temporary buzz.