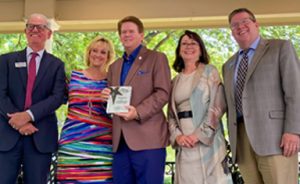 In addition to leading Arlington as mayor for two consecutive terms, Williams has played an integral role shaping the community for more than 30 years. Prior to being elected mayor he led two significant bond elections – both passed with wide margins – and was part of the Arlington Comprehensive Planning Committee.

Williams has also been active in numerous community organizations and held leadership positions in several non-profits, including the YMCA, Salvation Army, Mission Arlington, River Legacy Foundation, the Chamber of Commerce, and Convention and Visitors Bureau.

Besides his professional contributions to Arlington, Williams and his wife raised their three children in the city, and all three are graduates of Martin High School. They are also active members of First Baptist Church Arlington.

“Jeff Williams has helped make Arlington a dream city not only where people from all over the world have settled to raise families and start businesses, but a vacation destination with attractions and venues that offer world-class entertainment,” said Debi Knoblock, Assistant Vice President for Business and Community Engagement at Texas Trust.

The Dream Builder award honors Arlington citizens who have significantly contributed to making it an American Dream City. The award was conceived by Texas Trust Credit Union.

About Texas Trust Credit Union
Texas Trust Credit Union has been helping build brighter financial futures since its modest beginning in 1936. Today, the full-service credit union serves more than 120,000 members. With assets of more than $1.6 billion, Texas Trust is the 6th largest credit union in North Texas and the 17th largest in Texas. With a focus on the community, Texas Trust is creating a legacy of giving through generous financial donations that support local school programs and activities, non-profit organizations, and student scholarships; and by providing volunteer resources through its Community Unity team, which supports scores of charitable events each year. For more information, visit TexasTrustCU.org or follow us on Facebook at facebook.com/texastrustcu or Twitter at @texastrustcu.