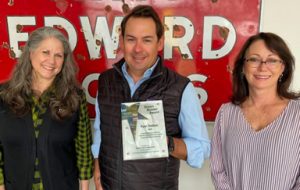 Dodson began laying the groundwork for a vibrant downtown Arlington in the early 1990s with the redevelopment of the 300 block of Abram Street, which brought in a unique mix of restaurants, bars, and retail establishments.

Over the past 20 years, Dodson has worked with the Downtown Arlington Management Corporation to transform the area by bringing in multi-family residential complexes, which added hundreds of new residents to downtown Arlington, and developing the Urban Union.

The first phase of the Urban Union transformed 70,000 square feet of  existing industrial buildings into creative, adaptive mixed use space that attracted a variety of businesses, restaurants, and office space. Phase II of the Urban Union, which is also being led by Dodson, will break ground later this year and further add to the vibrancy of downtown Arlington.

Today, more than 8,000 people work in downtown Arlington and its more than 10,000 residents enjoy the growing entertainment and commercial center, offering amenities and attractions from restaurants and live music venues to offices, apartments, and townhomes.

“Ryan Dodson had the foresight to take risks long before it was cool to invest in downtown Arlington. His vision and efforts have paid off with the creation of hundreds of new jobs, increased sales and property tax revenues, and a revitalized neighborhood. All of that has contributed to Arlington becoming the American Dream City,” said Knoblock.

About Texas Trust Credit Union
Texas Trust Credit Union has been helping build brighter financial futures since its modest beginning in 1936. Today, the full-service credit union serves more than 120,000 members. With assets of more than $1.3 billion, Texas Trust is the 6th largest credit union in North Texas and the 17th largest in Texas. With a focus on the community, Texas Trust is creating a legacy of giving through generous financial donations that support local school programs and activities, non-profit organizations, and student scholarships; and by providing volunteer resources through its Community Unity team, which supports scores of charitable events each year. For more information, visit TexasTrustCU.org or follow us on Facebook at facebook.com/texastrustcu or Twitter at @texastrustcu.