If You Can’t Say Something Nice …

The exposure to non-stop political advertising in the run-up to the Super Tuesday states’ primaries led us to two thoughts:

First, the DVR is one of the greatest inventions ever. Being able to record programs or pause in order to skip over the endless slew of national and local candidate ads is a great blessing, and a true sanity preserver. 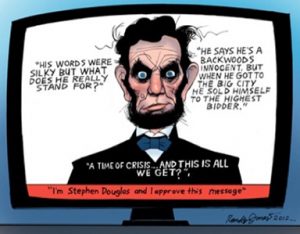 Ford wouldn’t tout their pickup trucks’ power or comfort or style, they’d spend the time telling you Chevy Silverado and Dodge Ram trucks are pieces of junk, built by idiots, and if you bought one you’d die in a fiery crash within two years.

Bud Light talk about the taste of its beer? Maybe, if there was time left in the ad after they dissed Coors Light and Miller Light as being bottled suspiciously close to the sewage plant. And you know, they probably really aren’t lower calorie anyway. It’s all a lie!

Thankfully, the mud-slinging is generally restricted to politics. One reason is that libel and slander are a lot harder to make a case for in the political realm, whereas you can bet Chevy and Dodge and MillerCoors would be at the courthouse the next morning in the wake of ads like the examples above.

And as much as we might bemoan the negative advertising in politics, it probably won’t ever end because it appears to work. And we will admit, there were a few local races in which the candidates only talked about themselves without slamming any other candidate. Those ads were bright spots in the dismal swamp of negativity.