Another Example of How Not to Do PR

We’re announcing the winner of our latest “How Not to Do PR” award, which goes to the city of Celina, Texas. They’re the winner in the “Tone Deaf” category. 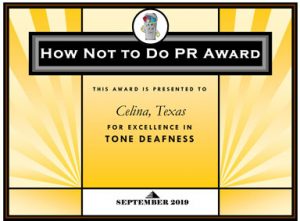 Saw a news item the other night about how scores of homes in one Celina neighborhood suddenly saw their water bills spike, doubling and tripling and even more over the typical summertime bill. After talking with one homeowner, the reporter went to city hall to find out more.

Here’s where it got weird. The city’s director of administrative services refused to do an on-camera interview, instead handing out a “press release” that essentially blamed all the homeowners for either having leaks in their sprinkler systems or for simply watering too much.

Now, August was a sizzling hot month, to be sure. And if it had been one or two homeowners with stratospheric bills, that explanation might have made sense. But not when there are that many people affected.

How difficult would it have been for the city to say instead that while water usage does go up in a hot, dry month, it was still concerned and would look into the problem to be sure that there were no billing mistakes or other issues on the city’s part? But no, they circled the wagons with that “we couldn’t possibly do any wrong” reaction. It’s not us, it’s you, they said, pointing the harsh finger of blame at their own residents.

We can only hope those homeowners show up at the next city council meeting, and make it a nice hot one for the powers that be.

And of course there’s a lesson here for everyone who does PR. Without having to admit responsibility, it’s still possible to demonstrate concern for your customers/citizens and promise to investigate thoroughly and find the answer, wherever the blame falls. And then follow through on that promise.

That’s one of our PR rules: If you want a good reputation, you have to earn it, one opportunity at a time. Mistakes are going to happen; it’s how you handle them that builds your reputation.