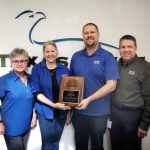 Texas Trust earned the award for its Community Unity Team, which was created to increase employee engagement in community outreach. The team’s mission is to be agents of positive change by motivating, equipping, and encouraging employees to make a difference. Texas Trust will now represent Texas in the national credit union recognition competition.

The employee-led Community Unity Team was recognized for its success at increasing employee volunteerism. In 2017, employees invested more than 1,100 hours of service and the team achieved 100 percent employee participation in community service. The largest effort involved an all-hands service project benefitting Mission Arlington, a local charity that feeds, clothes, mentors, and nurtures the hearts and spirits of those in need.

“Receiving this award reinforces that the Community Unity Team is following in the footsteps of Dora Maxwell herself,” said Pamela Stephens, executive vice president of Texas Trust and sponsor of the Community Unity Team. “This team has worked to create an employee culture that puts people first and emphasizes the importance of service, which is what Dora Maxwell did unceasingly as she worked on behalf of the poor.”

National winners of the Dora Maxwell competition will be announced by the Credit Union National Association at the end of October.

A high resolution version of the picture shown above can be downloaded here.

Texas Trust Credit Union was created in 1936 when a group of Chance Vought Aircraft Corporation employees pooled their savings so they could help each other achieve financial goals. Today, more than 115,000 members are served through checking and savings accounts; loans (personal, mortgage, auto, and small business); credit cards; insurance products; and investment services. Texas Trust Credit Union supports local students through its “Spirit Debit Rewards” program. With every eligible swipe of an SDR card, funds are donated to the school or district of the member’s choosing. To date, Texas Trust has donated more than $1.7 million since August 2011. Texas Trust serves members through 21 locations in Dallas, Denton, Tarrant, Henderson, Ellis, Johnson and Tom Green counties. With assets of more than $1.2 billion, Texas Trust is the 6th largest credit union in North Texas and the 17th largest in Texas. For more information, visit TexasTrustCU.org or follow us on facebook.com/texastrustcu or Twitter at @texastrustcu.