HOUSTON, July 17, 2018 – For Chocolate Bayou Federal Credit Union, turning management of its ATMs over to Dolphin Debit was the right choice at the right time, for several reasons. 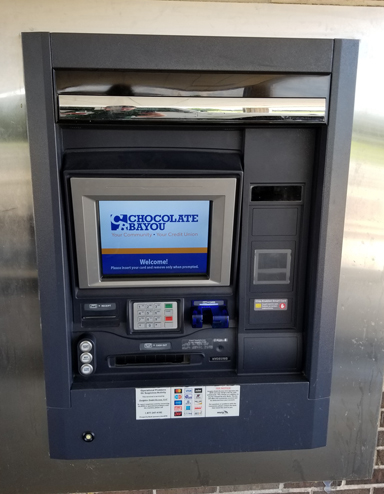 The Alvin, Texas-based credit union was saddled with aging ATMs, all but one too old for an upgrade to accommodate EMV cards. It also saw an opportunity to leave behind the hassle of managing its own fleet.

All of Chocolate Bayou FCU’s ATMs are now with Dolphin Debit, the full-service ATM management company. The 56-year-old credit union, with more than 13,500 members and assets of just over $123 million, has ATMs at its two standalone branches and its two high school-based branches.

“Being a smaller credit union, we just didn’t have a lot of ATM expertise in-house,” said Gary Angeles, President and CEO of Chocolate Bayou FCU. “Anytime we had an issue, we had a lot of people pointing fingers. On top of that, it was an aging fleet that we needed to make investments in, and I saw Dolphin Debit as a one-stop solution.”

That has proven true since Chocolate Bayou made the switch to Dolphin Debit, Angeles said, because now if there is a problem, the finger-pointing goes in only one direction, and Dolphin takes care of it.

Since the switchover, Angeles added, “We have had fewer complaints about ATMs being down. We’re happy with the simplicity of this, and we have peace of mind knowing that everything is being handled for us and we don’t have to worry about upgrades and compliance.”

Gary Walston, co-founder of Dolphin Debit, said that those issues – upgrades and compliance – are major considerations for credit unions now, with the coming sunsetting of support for the Windows 7 operating system and the need to switch over to Windows 10.

“It’s very important for credit unions to evaluate their ATM fleets and determine how costly the next upgrade will be,” Walston said. “This could be just the right time for them to make a change and offload the burdens of ATM management to Dolphin Debit.”