Winners and Losers in the PR Game

It’s a challenge to do things right, and of course far too easy to do things wrong. We’ve got an example of each of them from some recent news coverage.

First, our winner is Country Time, the lemonade mix company. They came out with a promotion in which each Twitter retweet results in a $1 donation to a $500,000 “Legal Ade” fund for kids harassed by local government officials who threaten to shut down their innocent lemonade stands down on some “doing business without a license” foolishness.

You hear about these types of incidents every summer, where a kid sets up a lemonade stand and in no time some idiot neighbor calls the city government and complains. 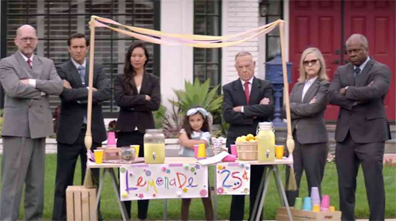 So the city sends out one of its useless bureaucrats to threaten the kid with everything short of jail time if she or he doesn’t close down the stand right then.

Not only was Country Time’s idea a brilliant one, but the execution, through images such as this one of a bunch of lawyer-looking types standing around a youngster’s lemonade stand, was creative and inspired. It gained a ton of fun media coverage.

The nice thing about this is that Country Time could take a stand (no pun intended) that isn’t likely to offend anyone politically, which is the real risk these days. Whether we’re on the left or on the right, almost no one looks kindly on the bureaucratic mindset that seems OK with hassling little kids taking part in what is essentially a rite of childhood.

So taking that and running with it earns Country Time a tip of the hat from us.

Now for the loser.

There is a local upscale shopping mall in the DFW area that was the site of a nasty physical assault of a teenager the other night, after normal mall hours when the movie theater complex at this mall was still operating.

Almost 24 hours later, we’re watching the news report about it, and one of the people interviewed makes the point about “where were the security guards?” Cut back to the anchor, who says, “we wondered about that too. We asked the mall’s public relations department, but haven’t heard back from them.”

No, no, no, no, no! If something like that happens on your business’ property, you jump out ahead of it. Be proactive about it. If your PR people don’t know that, get new PR people. You should never hear a news anchor say what this one said about your organization, because the potential reputational damage is huge. (“What are they hiding?” people will ask.) By any measure, those PR folks are losers.