Arlington, Texas – November 30, 2022 – Peggy Esparza, CFO of Texas Trust Credit Union, was named one of the top 25 Most Powerful Women in credit unions by American Banker. She was the sole contender from Texas-based credit unions to make the list.

The publication’s inaugural listing evaluated women in leadership roles from credit unions across the country who are leading their organizations through times of rapid and unprecedented change. 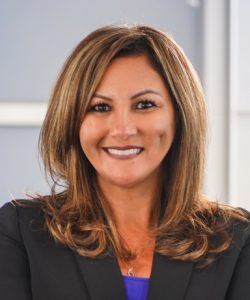 Esparza’s credit union story began in the 1990s when she was 18 as a teller with little career ambition. Her initiative and ability to solve problems gave her many opportunities to develop skills and advance.

Through Texas Trust’s tuition reimbursement benefit, Esparza was able to attend college, earning a bachelor’s degree in accounting and a master’s degree in business administration from the University of Texas at Arlington. She obtained both degrees while working full-time, advancing in her career, and raising two children.

During her 27-year career at Texas Trust, Esparza has led numerous strategic financial initiatives and has held senior leadership roles overseeing all aspects of Texas Trust’s financial operations, leading her to be named CFO in November 2021.

Minge added, “Peggy’s tenure at Texas Trust is a testament to hard work, perseverance, commitment, and dedication. She is a trailblazer who meets challenges head-on and doesn’t stop until a problem is successfully resolved.”

During Esparza’s career at Texas Trust the credit union has grown from assets of $257 million to $2 billion today. With three branches then and 22 now, membership has grown from 28,000 to more than 130,000.

Texas Trust Credit Union has been helping build brighter financial futures since its modest beginning in 1936. Today, the full-service credit union serves more than 133,000 members. With assets of more than $2 billion, Texas Trust is the 6th largest credit union in North Texas and the 17th largest in Texas. With a focus on the community, Texas Trust is creating a legacy of giving through generous financial donations that support local school programs and activities, non-profit organizations, and student scholarships; and by providing volunteer resources through its Community Unity team, which supports scores of charitable events each year. For more information, visit TexasTrustCU.org or follow us on Facebook at facebook.com/texastrustcu or Twitter at @texastrustcu.