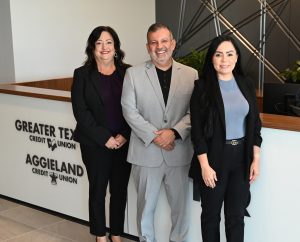 Tina Muth, a 29-year employee, was promoted to oversee the growth of branches operating under the Aggieland Credit Union subsidiary of Greater Texas Credit Union. Muth has held a variety of managerial positions at the credit union and has had a significant impact on the credit union’s development in the Bryan-College Station market. Muth has a business degree from American InterContinental University.

Lole Nuñez joined Greater Texas to support branches in Austin, Kyle, San Marcos, and Bastrop. Nuñez has more than 20 years experience managing branch operations for both credit unions and banks, focusing on all consumer-oriented services, as well as coaching and developing branch associates.

Based in San Antonio, Cynthia Olivares brings 17 years experience in consumer financial services to Greater Texas, where she will oversee the operations of branches in Edinburg, San Antonio, Arlington, Dallas, and Houston. Olivares has a business administration degree from The University of the Incarnate Word in San Antonio.

“Our branches represent the foundational relationship with our members,” said Jason Goodman, COO of Greater Texas|Aggieland Credit Union. “With this team of leaders that we have put in place, we now have even greater hands-on engagement of key operations in our communities. By strengthening our retail strategy and branch networks, we are working to ensure we deliver top-tier banking experience for every member.”