Inaugural Class will be Honored on November 17

Arlington, Texas – October 13, 2022 – The Greater Arlington Chamber of Commerce announced its inaugural 40 Under 40 class. Texas Trust Credit Union is honored that its executive director of the Texas Trust Gives Foundation, Washima Huq, is part of this aspiring leadership class.

Huq is actively involved in a number of community and civic organizations outside of her duties managing the Texas Trust Gives Foundation, where she oversees the charitable giving of the $1.8 billion credit union. 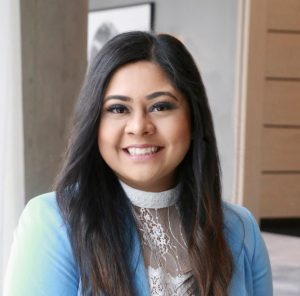 Earlier this year, Huq was named the 2022 Rising Star by the Greater Arlington Chamber’s Women’s Alliance. She has also received a number of other professional awards, including being named the Cornerstone League Young Professional of the Year in 2021.

“Washima is driven to make a difference and is determined to succeed,” said Ginia Chapline, COO of Texas Trust Credit Union. “She proactively pursues initiatives and community involvement where she can learn, lead, and lift others up, so that everyone can achieve their goals and dreams.”

The recipients of this year’s 40 Under 40 class will be honored at an event November 17. They will also be featured in the November issue of Arlington Today.

A high resolution image of Huq can be downloaded here.