Arlington, Texas – July 21, 2022 – Michael Jarrett – “the Senator,” as he was affectionately called by those who knew him – was honored today posthumously with the Downtown Arlington Management Corporation’s (DAMC) Dream Builder Award. 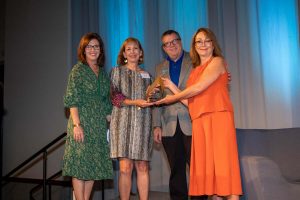 Jarrett’s business legacy is firmly established in the successful revitalization of downtown Arlington. He raised millions of dollars over the years for Arlington charities and civic groups and led the campaign to fund the city’s economic development corporation, which fueled the growth of the city of Arlington.

Jarrett passed away in December 2021 at the age of 72. He was a devoted husband and father and a friend to everyone he met.

Jarrett had a 51-year career in banking and was known to be a problem solver. He most recently held the position of president of the Worthington National Bank in Arlington, where he served for more than 10 years.

“It is an honor to present the Dream Builder Award to Michael’s family,” said Maggie Campbell, President and CEO of the Downtown Management Arlington Corporation. “Michael played a pivotal role here in Arlington. He was a phenomenal business person who loved people and the community where he lived.”

Campbell added, “Michael led by example and left a monumental legacy for us to build upon so that Arlington will continue on as the American Dream City.”

This marks the seventh year of the Dream Builder award, which was conceived by Texas Trust Credit Union.

A high resolution picture of the award presentation can be downloaded here.