HOUSTON, August 10, 2021 – In a move to reduce the staff burdens associated with managing its ATM fleet, USF Federal Credit Union in Florida has turned over operations of all of its machines to Dolphin Debit, the full-service ATM management company. The strategy has already paid off with major savings in staff time and overall smoother operations. 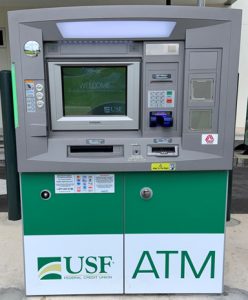 The $930 million, 65,000-member credit union serves the University of South Florida faculty, staff, and alumni, along with a number of other major SEGs, such as Darden Restaurants and Tampa General Hospital. It has 19 ATMs now, with two more to be installed later this year in hospitals currently under construction.

USF FCU had always operated its own ATMs, said CTO James Stock, but when that became an overwhelming burden, the credit union knew it needed a better approach.

“The cost and complexities of keeping up with the ATM operating systems and patches were just too time consuming,” Stock said. “Some of the devices were end of life and requiring costly updates, and employees were spending a great deal of time scheduling cash services, repairs, and updates and managing connectivity.”

USF FCU called in a consultant for guidance in making the change to outsourcing, and among the companies the credit union considered for partnering, Dolphin Debit stood out.

“Dolphin Debit just had the best overall options for us, and had great references. They could do everything we were looking to do,” Stock said.

For USF FCU, the top priorities were reducing the ATM management burden, ensuring highly reliable ATM operations, and the ability to add ATMs anywhere they want with just an update to the service agreement.

“Prior to Dolphin Debit, we had three or four people consistently dealing with cash ordering, disputes, and keeping ATMs up and running,” Stock said. “We have probably saved at least two full-time positions by outsourcing, and employees can do other things instead now. We gained our productivity back.”

“Even among larger credit unions with ample staffs, eventually the management burden associated with ATMs gets to be too much,” said Joe Woods, Senior Vice President of Marketing and Strategic Partnerships for Dolphin Debit. “They come to realize their time can be far better spent in more productive member service activities rather than in managing their machines.”