Thou Shalt Not Bear False Witness

Inevitably, in public relations and marketing, we all bump up against that line that separates “positive spin” from “we’re just outrightly lying here.” While the line may be wavy at times, the vast majority of us know when we’ve crossed it or are about to. 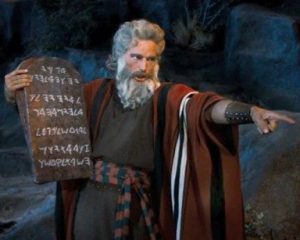 to think that we have not crossed that line on behalf of a client. We certainly hope that’s true, but if it isn’t, that we never did it knowingly. And frankly, we don’t see anything wrong with “spin,” provided you keep it under control.

We all want to put our product, our service, and our business conduct and behavior in the best possible light. That’s certainly fine. As long as we are telling the truth and not bearing false witness, as Moses (Charlton Heston, to be precise, in the accompanying photo) would say.

So why is it so important to be truthful? Besides the moral imperative, there are many practical reasons to be honest and forthright at all times. For instance:

In a past career post, I worked with a magazine ad salesman who was one of the most charming guys you ever met. At first.

It seemed he had been everywhere and knew everybody, and he might have convinced all of us that was the case. But he overreached too often, and you quickly caught onto the fact that about 90 percent of what he said was absolute baloney. So did anybody trust him? Do we really have to ask?

And there you have it: Even if you don’t think that a moral code dictates honesty in your communications, your advertising, your business relationships, and other instances, do keep in mind that dishonesty can exact its price in other ways as well.