ARLINGTON, TEXAS – February 27, 2020 – Alex Godina, Texas Trust Credit Union Assistant Vice President of Direct Lending, has been named Member of the Year and Director of the Year by the Grand Prairie Chamber of Commerce. Godina received the awards at the Chamber’s annual community banquet. 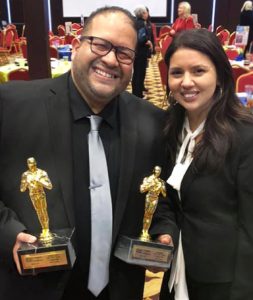 The awards recognize and celebrate the outstanding people who have demonstrated a true commitment to business growth and community development in Grand Prairie.

“Alex exemplifies what it means to be a chamber member,” said Michelle Madden, president of the Grand Prairie Chamber of Commerce. “His commitment and motivation to the success of Grand Prairie’s business community is what makes him stand out as a member.”

Madden added, “The fact that Alex received two awards reflects how highly respected he is by his peers and the Grand Prairie community. He is the one everyone can count on and he has become a great personal friend and leadership partner.”

Nominations for member of the year were made by the community and Chamber board members. The winner was selected by previous award recipients and the board. Godina’s board peers nominated and selected him as Director of the Year.

In addition to these honors, Godina previously received a proclamation in his honor from the Mayor of Grand Prairie marking his board leadership, his status as the first Hispanic chairman of the board, and his many other contributions to the city.

“We are proud of what Alex has accomplished,” said Jim Minge, President and CEO of Texas Trust Credit Union. “We are a people company and Alex embodies that sentiment in everything he does. His passion and commitment to helping other people and organizations succeed is what makes him such an invaluable employee, volunteer, mentor, and friend. We are proud he is on the Texas Trust team.”

Godina is currently the immediate past chairman of the chamber board and has been a member of the Grand Prairie Chamber since 2011.

A high resolution picture of Alex Godina can be downloaded here.

About Texas Trust Credit Union
Texas Trust Credit Union has been helping build brighter financial futures since its modest beginning in 1936. Today, the full-service credit union serves more than 118,000 members. With assets of more than $1.3 billion, Texas Trust is the 6th largest credit union in North Texas and the 17th largest in Texas. With a focus on the community, Texas Trust is creating a legacy of giving through generous financial donations that support local school programs and activities, non-profit organizations, and student scholarships; and by providing volunteer resources through its Community Unity team, which supports scores of charitable events each year. For more information, visit TexasTrustCU.org or follow us on Facebook at facebook.com/texastrustcu or Twitter at @texastrustcu.

Photo caption: Alex Godina with his wife, Lisa, at the Grand Prairie Chamber of Commerce banquet, where he was named Member of the Year and Director of the Year.