Arlington, Texas – September 23, 2019 – Patti Diou, executive director of the Levitt Pavilion in Arlington, is the recipient of the 2019 Downtown Arlington Dream Builder award. 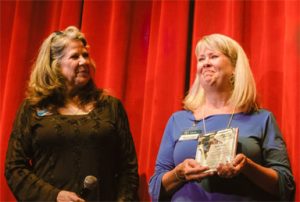 Diou was recognized for her instrumental role in turning downtown Arlington into a destination location. The Levitt Pavilion has been a major contributor to the redevelopment of downtown Arlington. Its free concerts draw an annual attendance of 100,000 people, which has helped attract a dozen restaurants to the area, with more planned.

Diou was presented with the award by Texas Trust Credit Union at the annual meeting of the Downtown Arlington Management Corporation.

The Dream Builder award was conceived by Texas Trust in 2016 as a way to honor citizens who have a significant and positive impact on the Downtown Arlington community. Debi Knoblock, Assistant Vice President for Business and Community Engagement at Texas Trust, presented the Dream Builder award to Diou. “Diou’s vision for the Levitt has been instrumental in reshaping the downtown area and making Arlington the American Dream City,” said Knoblock.

Earlier this year, the Levitt was named a Great Public Space by the Texas Chapter of the American Planning Association. This recognition highlights public spaces that are creating communities of lasting value. Diou’s efforts at the Levitt have turned downtown Arlington into a gathering place where families can enjoy the arts and entertainment or just relax in the park-like setting of the Levitt grounds.

About Texas Trust Credit Union
Trust Credit Union has been helping build brighter financial futures since its modest beginning in 1936. Today, the full-service credit union serves more than 118,000 members. With assets of more than $1.3 billion, Texas Trust is the 6th largest credit union in North Texas and the 17th largest in Texas. With a focus on the community, Texas Trust is creating a legacy of giving through generous financial donations that support local school programs and activities, non-profit organizations and student scholarships and by providing volunteer resources through its Community Unity team, which supports scores of charitable events each year. For more information, visit TexasTrustCU.org or follow us on Facebook at facebook.com/texastrustcu or Twitter at @texastrustcu.