It’s looking like 2018 is shaping up to be the Year of the PR crisis, so we all need to have plans in place to deal with one. It probably isn’t a matter of if a crisis will come knocking on your door, but when. 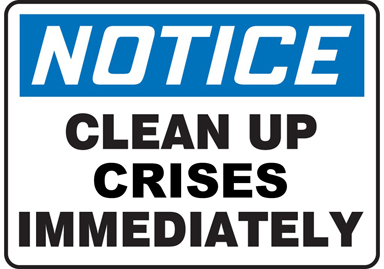 Hardly a week goes by anymore without some kind of crisis (we’re talking about you, United Airlines). But it could happen to any company where an employee makes a decision or takes action that ends up turning out badly.

Like firefighters heading to a Texas wildfire on a windy day, the PR people may not have caused the problem, but they’re the ones with the burden of solving it.

One key piece of advice: Get to work immediately. This minute. Because even the slightest delay can be harmful. That’s not just logic talking, either. There is research data to prove it.

One recent study looked at three PR crises from 2017 and the effect on consumers’ willingness to buy from the affected companies. The companies were United Airlines (this was the famous video of a passenger being hauled off a plane), Pepsi (for an ad some people found objectionable) and Uber (for a series of mini-crises).

United Airlines, you may recall, delayed far too long in addressing the backlash over the viral video. Pepsi moved quickly, and Uber was somewhere in the middle. These companies’ consumer favorability declines were directly related to how long they took to address the issues.

Before the video, 68 percent of consumers were willing to fly United. In the midst of the PR crisis, that plunged to 42 percent. But even seven months later, that willingness had only climbed back to 52 percent, far below the pre-crisis level.

Pepsi, which reacted quickly, saw only a marginal dropoff. Pre-crisis, 58 percent of consumers were willing to buy Pepsi. During the crisis, that dropped only to 55 percent, and climbed back up to 56 percent seven months later.

For Uber, 60 percent of consumers were willing to ride with the service before the bad news period. That dropped off to 47 percent during the height of the mini-crises, and rebounded a bit, to 50 percent, seven months later. Not quite as drastic a dropoff as United Airlines, but far from as good as Pepsi.

Of course, response time is only one of the many elements of an effective crisis strategy. And if you respond badly, doing it more quickly won’t really help that much. But if your strategy is a good one – and you can tell your side of the story well – then getting out there immediately is only going to help.