When Editors Attack, Stay on the High Road

In the past few weeks, while sending out client news releases to the media, we’ve encountered a couple of incidents of editors who were … not to be unkind, but it’s true … real jerks. 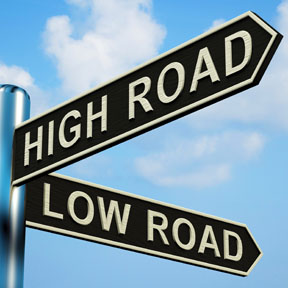 These kinds of incidents don’t happen often, so they can take you by surprise when they do. Usually it takes the form of the editor reacting angrily to whatever you sent to them and lashing out at you.

I’d say 99 percent of editors, if they aren’t interested in what you sent, just delete it and move on. Every now and then, though, an editor will choose you as their punching bag. It’s sort of a “How dare you send this to me! You are a beast!” reaction that doesn’t seem to make any sense if you are doing the proper targeting.

Maybe you caught them before their morning coffee, or maybe it’s our social media culture, where anger seems to be the default emotion to anything that represents even a slight disturbance in the force. Whatever the cause, you have to determine how to deal with it.

Our preferred approach is to offer an apology. If there has been a mistake and this person should not have gotten this news release or other email, then an apology is the right course of action. That’s true even if you didn’t do anything wrong. It may not do any good in the editor’s eyes, but you need to be the conciliatory one.

It’s best not to get into an argument with the offended editor, even if you’re certain that you’re right. Back in the print media days, the conventional wisdom was to avoid getting into fights with people who buy ink by the barrel. In other words, their ability to make you look bad far exceeded your ability to “hurt” them.

Ink has evolved into online and social media megaphones, but the advice is still good. Be mindful of their reach and ability to make and break reputations, and take more of a “the customer is always right” approach to the editor as the customer for your news.

It may be painful, but resist the urge to take up arms and go into battle. It’s the better choice in the long run.