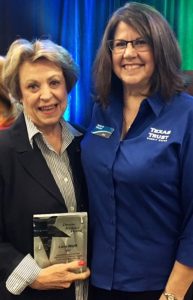 Wolff was recognized for her passion and tireless efforts for economic revitalization, which were instrumental in the formation of Downtown Arlington, Inc., where she was the first executive director of the organization.

Wolff continues to be very active in promoting and supporting efforts that make Arlington America’s Dream City. She currently serves on the City Council, representing District 5, which includes City Hall, the University of Texas at Arlington, the city’s central library and the Arlington cultural district.

DAMC Board Member Debi Knoblock, Assistant Vice President of Relationships and Opportunity at Texas Trust, presented the Dream Builder award to Wolff. Texas Trust conceived the Dream Builder Award and worked with DAMC to establish it in 2016 as a way to honor citizens who have had a significant and positive impact on the Downtown Arlington community.

“Arlington is home base for Texas Trust and we are proud to be connected with the DAMC,” said Knoblock. “Through the Dream Builder award we can shine a light on what is going on with the DAMC and highlight the people that are making Arlington the American Dream City.”