Why Off the Record Should Be Off Limits

Recently, a couple of high-profile people found themselves out of jobs after speaking to certain news media and having big stories blow up in their faces. 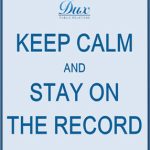 In case you missed it, the two individuals are Anthony Scaramucci, who was briefly the press spokesperson for the Trump administration, and Steve Bannon, a former close Trump adviser.

At this point, we ask you to set aside any strong feelings either way about President Trump or the people around him. All we want to address here is something that both men said after the news articles were published and they found themselves in uncomfortable positions.

Both of them said they thought they were speaking off the record to the journalists. That may have been a bit of blame-shifting after the fact, but it’s the aspect of all this that we want to focus on.

“Off the record.” Hmmm. Let’s think about that.

We’ll admit that in certain power circles people do speak off the record to reporters, and more often than not the reporters respect that and shield the person who spoke to them, referring in articles to him or her only as a “source” of some sort. In high-stakes politics or financial dealings, this may be one of those necessary evils.

Anywhere else, we advise in the strongest of terms not to do it. It will almost never to be to a client’s benefit to go off the record with a reporter.

First, you simply cannot be sure that the reporter is going to hold up his or her end of the bargain. Second, in the course of an interview, sliding into an “off the record” segment isn’t always a clean break from the rest of the discussion, and even a friendly reporter may not really remember what was on and what was off. Their error can mean major embarrassment for you.

We always stress to clients that anything they say in an interview can be construed by the reporter as on the record. That includes any and all comments made even after the reporter has turned off the audio recorder and is making the kind of small talk that makes you think the interview is officially over.

This is why media training and interview practice are important, to make sure that the client knows how to say things clearly and understandably and to maintain a degree of control over the conversation. And to avoid that wrong step into an off the record quagmire.