HOUSTON, May 23, 2017 – ASI Federal Credit Union, seeking to improve service to its members, has turned over operations of its ATM fleet to Dolphin Debit, the full-service ATM management company.

In February, Dolphin Debit installed a dozen new ATMs for ASI as part of the transfer of ATM management. Two more ATMs will be added when ASI opens its new Mid-City branch in New Orleans, its 12th location, in June. 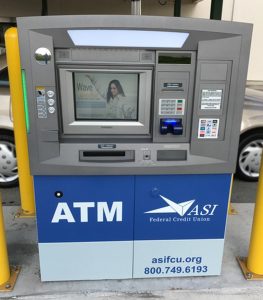 Harahan, Louisiana-based ASI serves four parishes in the New Orleans area. Chartered in 1961, it is the eighth largest credit union in Louisiana, with more than 56,000 members and assets of $313 million.

ASI had already been outsourcing ATM management for several years before turning to Dolphin Debit, Operations Support Manager Mary Jordan explained. “We moved to outsourcing to make sure we were ADA compliant. It was easier to outsource than to deal with purchasing all the ATMs ourselves.”

ASI began evaluating other outsourcing options and liked what it saw with Dolphin Debit. It also got good reviews about Dolphin from other credit unions in the area, so ASI opted for Dolphin and moved ahead with the transition.

Sally Hoffstadt, ASI’s Vice President of Marketing, said that the new machines offer greater potential for on-screen advertising. She also praised Dolphin Debit’s responsive service and noted that because the company manages ATMs for so many other local credit unions, ASI’s members can use those other machines at no charge.

Hoffstadt said the two ATMs that Dolphin Debit will install at the new branch in June will feature image deposit functionality, and that is likely just the start.

“We are looking at adding image deposit for some of our busier branch locations as well,” Hoffstadt noted. “Because of the convenience, that is something that our membership has been asking for.”

“Just as credit unions pride themselves on their superior service to members, they also look for quality service in the partners they work with,” said Gary Walston, co-founder of Dolphin Debit. “ASI Federal Credit Union’s experience shows the importance of choosing the right ATM management company in order to get the high level of service that any credit union expects.”